How does this work?

After you purchase your package, I will do a complete profile of your relationship and where you stand in regards to making your fantasy happen. It will outline any advantages you have as well as disadvantages you have and the obstacles you'll need to overcome.

You'll be provided with a Personalized Plan that details how you'll want to move forward and the best steps you can take in order to do that, based on your preferences and your wife's personality and resistance style.

Once your cuckold/hotwife consulting is underway, you can use your follow-up e-mails to ask further questions as needed.

That means you’ll get continued consulting advice along the way to help you when you need it most. Here’s the good thing about this:

Emails that you send to me do NOT count. In other words, you are welcome to send me as many emails and updates as you’d like, free of charge. The only emails that count towards your consulting package are full-length, advice e-mails that I send back to you.

So as an example, you can send me five e-mail messages giving me more information or updates on your situation, and the only one that counts towards your package will be the one you receive from me in return, with the recommendations and advice.

Quick clarifications on the advice also do NOT count, nor does an e-mail in which we celebrate making any kind of progress.

How long do I have to use my services?

Your purchased email consultations are available to you for one full year after the purchase date, allowing you plenty of time to make your fantasy happen at your desired pace, and allowing you the option to save some of your extra emails for future issues that may arise. Many clients choose to save one or two emails on how to deepen or enrich their fantasy once it gets underway.

Why do I need a consultant and how can I fit it into my budget?

This fantasy of yours, the desire you have inside to make it happen—think about when you first realized it was a turn on for you…perhaps it was only some weak wish you had, maybe even one you were hesitant to admit to yourself…and think about how it’s now become a full-fledged and hard-on desire…one that isn’t going away.

Think about how over time it’s only gotten more pronounced, louder, bigger, how you can sometimes get consumed by it.

Think about how the longer you go without taking steps to actually do something about it that it just sits under the surface repressed, unfulfilled, and because of that—it starts to eat away at you.

I want you to know that you don’t need to be controlled by that fear any longer. And whatever is holding you back, be it yourself or your wife's reasons, they don't have to anymore because now you can finally start doing the right things in the right way.

And if you're thinking but it's a lot of money, I understand. However...if you honestly KNEW—not just hoped, not just believed, but confidently KNEW you had the key to making your fantasy come true—how much money would you be willing to spend?

Odds are that it would certainly be more than the above numbers. At least that's what most clients say.

Is my purchase secure & guaranteed?

Your purchase also comes with a guarantee. You see, I genuinely want to help you make your fantasy a reality. I don't want you to have to think you can't make it happen simply because you've already tried, or because your wife has said she's not open to it, or because you're worried about wasting your money. That's why if you aren't satisfied with your interactions with me or with your Personalized Cuckold/Hotwife Plan™, I will provide you with a full refund (within 60 days of purchase and within the first two e-mail exchanges). Your satisfaction, along with helping you get the results you want, are of the utmost importance to me.

Can I pay anonymously and without my wife finding out?

I take discretion very seriously, and that's why  you can pay in multiple ways.

Option 1) Simply use a credit or debit card; any charges appear on your credit card bill as "District 36 LLC".

Option 2) Pay with Paypal. All charges appear on your credit card bill as "PAYPAL *APOTHEOSISM"

Option 3) Use cash to purchase a prepaid Visa/MasterCard/Amex gift card and pay with that. When you have the gift card, simply click on the buy now button, and pay with either Stripe or PayPal, entering whatever information you choose. You don't even have to enter your real billing address.

Option 4) Pay anonymously using cryptocurrency. All of my products and services can be paid for with cryptocurrency. Below each "Buy Now" button for a product or service, you will see an accompanying "Pay With BTCPAY" button. If you don't know how to use cryptocurrency, it's an 8-12 minute process max to get some. I can prove it. Click here for the step by step screenshot tutorials I made.


Like I said, I take discretion very seriously. If you have ANY trouble at all, click here to go to the contact page and leave me a message.

Do you work internationally?

Absolutely! In addition to clients in the United States, I have worked with clients from all over the world including, but not limited to, Canada, United Kingdom, France, Australia, Vietnam (pretty cool, right?), Denmark, and Ireland, just to name a few.

When can I expect a response?

Quality is very important to me and I know it’s important to you. Because I'm just one person and many clients are in need, I can only take a limited number of new clients each week (I'm only human!). Personalized Cuckold/Hotwife Plans are completed within 2-4 business days, on average, depending on demand. Therefore, I recommend you sign up sooner rather than later and don’t wait any longer than you've already been waiting. If you are in a hurry, you'll have the option to have your plan bumped to the front of the line by purchasing a first priority service package for a one-time non-refundable fee of $35 (details provided after checkout).

All other emails are answered in order of receipt, within 2-3 business days, similar to “making an appointment.” If you require faster response times, contact me after your purchase and let me know. 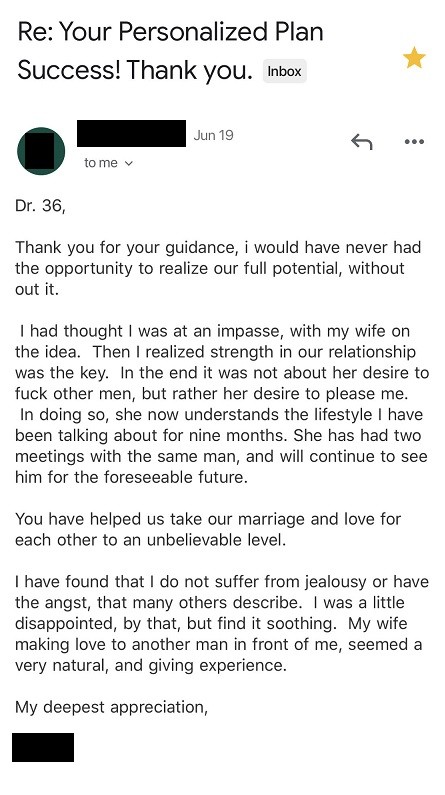 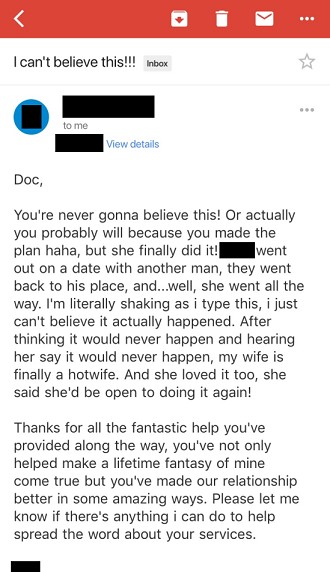 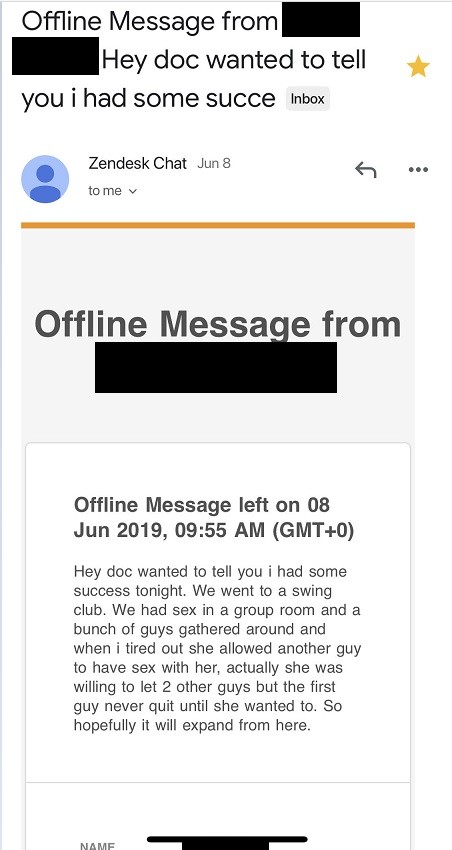 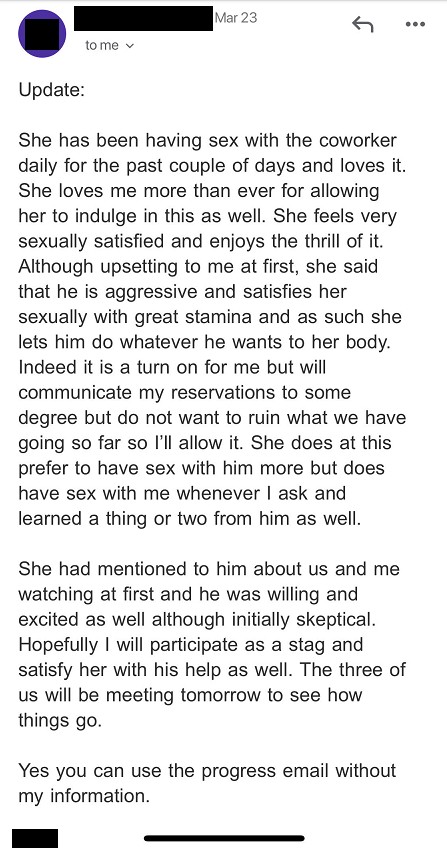 What Are Clients Saying?

It had been a long time since my wife had been sexually pleased (partly due to my size, partly due to performance issues), and I really really wanted her to take on a lover, for her pleasure and my own voyeuristic tendencies. She wasn't open to that idea at all though. I did get her to be willing to let me use a strap-on which worked in the beginning but lost it's appeal to her after a short time. We became more and more distant due to having less and less sex. That's when I decided to enlist the cuck consultant's help. With our first email he had pinned my problem! I started immediately re-working my situation with the recommended changes and within a week we were able to talk about my fantasy without her getting upset! Not only that, but I got her to admit she was into it! From there it was all downhill (in a good way). It's like the beast was unleashed and I couldn't have done it without him. THANK YOU! THANK YOU! THANK YOU!

Don’t hesitate to purchase a Personalized Cuckold/Hotwife Plan™! It allowed me to overcome my wife's objections and now she's slept with two other men so far! His advice is comprehensive and so easy to implement. Thanks for the help, Doc!

I was convinced I'd never be able to get my wife into my fantasy. Then I found Dr. 36. He has been a godsend to our relationship, and helping me with step by step advice that is well researched, empathetic, and effective. He gave me a method that worked for my relationship and wife, and encouraged me to stay the course. Don’t think about this twice, reach out to Dr. 36. YOUR LIFE WILL CHANGE!

I finally was able to get her to go out on her own and go on a date with a guy she met online. The best part was that she said she enjoyed it and would be open to doing it again! EDIT: Reconnecting with my wife after that first date was fun, but it was nothing compared to reconnecting with her after she officially fooled around with one of her dates. She gave him a blowjob in the car in the parking lot of the restaurant they had dinner in! And she swallowed. The doors that have been opened because of all this are just incredible to me, I love it, and so does she. 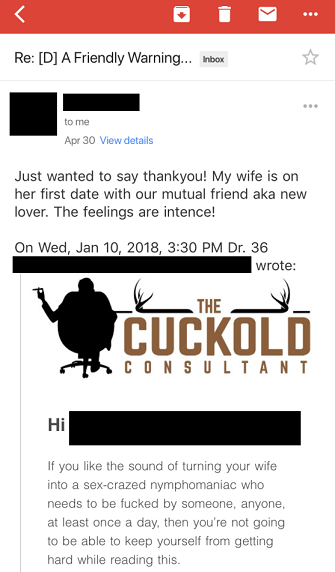 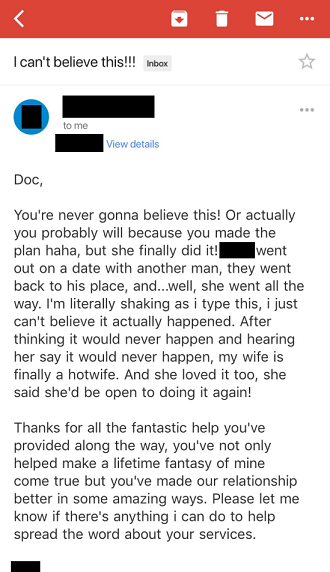