Allow me to introduce a young couple who’s so popular and so erotically filthy that they’ve managed to attract a following of over 104,000 people on Twitter. I don’t think I need to tell you how big that is for a random amateur couple.

If the idea of a girl who truly has her own innate craving to show herself off because she loves it and gets off on it—a girl who is with a strong and confident guy who encourages this kind of behavior—is an idea that gets you going, then you are NOT going to want to miss out on this interview, or the full size version of the featured picture above which can be found at the end of the interview.

So without further delay, I give you @FilthCouple!

Q: How did sharing the lovely body of the Mrs. come about?

A: Mr says it was my idea but I feel like we decided on it together.  We used to talk about all the dirtiest things we might ever want to do, and mine is more exhibitionist in nature. We started looking into different ways to show off - posting pictures online, then eventually sex clubs - and it’s been something we do ever since!

Not going to lie, I was thrilled when he said I could post my sexy pics online.  It was something I always craved that my ex did not allow.  I told him if he ever changed his mind I would stop - but he never has, in fact, he’s the one that reminds me if I go a while without doing it!

There have been moments where we’ve put our lifestyle on hold a few times - either a bad experience or daily life gets in the way - but we always come crawling back.  And crawling is sexy.


Q: Have you ever shown off in public? If so, can you tell us about where, and what it was like for you?

A: Not ‘general public’ public - but definitely in sex clubs!  Amongst the general public I’m a bit less showy - I reserve my filthy side for a more open-minded crowd.

I’ve been to several different sex clubs and am always eagerly awaiting the go-ahead from Mr to take my clothes off and, if there’s a pole, show off my pole dancing moves.  I really love that feeling of having people’s eyes on me and wondering what they find sexy about me, if they’re going to fuck their own wives especially hard tonight after watching me, or if they’re going to try to fuck me!

Q: You’re able and willing to flirt with other men. How did that all start, and what’s that like for you? Has it ever led to you to anything physical with another man?

A: Mr and I decided early in the relationship this is something we wanted to try.  I am an exhibitionist by nature and in past relationships, really struggled to keep a lid on it.  With Mr I don’t feel that same frustration of wanting to be a good partner and also wanting to entice other men to  eye-fuck me at the very least - because I get to do it!

It has definitely led to me playing with other men, now that I’m in a relationship where that’s acceptable and, gasp, even encouraged!  I’m particularly fond of showing men how deep I can take a cock in my throat and have done so on a few occasions now.  I love hanging my head over the edge of the bed and telling someone to fuck my face.  Other times we go to clubs, get off on the attention I’m getting and go to a private room so I can fuck Mr’s brains out.


Q: What are some of the things that turn you on most about the Mrs. showing off and flirting with others?

A: I’m not sure I’d call it a turn on so much as a thrill - she’s mine, but I allow others to look and maybe touch.  Ultimately I enjoy it because I like seeing her enjoy herself.

I’m also a realist and I appreciate that throughout the course of someone’s life they might want to try new things but still come home to their partner.  I let Mrs test drive, and she always comes back.

Q: How do you make sure the fantasy doesn’t ever wind up becoming dangerous where it could negatively impact your own relationship in some way?

A: We talk about everything we do - before, during, after.  Every night I’m going to do something we discuss what we’re fantasizing about, what boundaries we might have, and how we’re going to communicate discreetly if either we want to take it further than we discussed earlier in the night or shut it down and go home for some cuddles and romance.

We’re also pretty keenly aware of each other’s sensitivities - things that are going to make me uncomfortable, things that will make him uncomfortable - and we’ll avoid situations where those things might come up.

That’s not to say we’ve never had bad experiences though.

Our first night at a club, we fucked up really badly.  We did the right thing and discussed in advance what was okay, what wasn’t, but once we got there we had a huge misunderstanding with a couple that I’d hit it off with.  The guy asked Mr if he could fuck me, but Mr thought he’d just commented that I was hot - so Mr nods and smiles and suddenly this guy is slapping a condom on and going for it.  And I’m like, wait, really?

We were new and nervous and didn’t put the brakes on until it was a full-fledged shitty experience.  We almost broke up that night, it took a while to get over the confusion, jealousy and anger of what we’d done.  We agreed though that it was really just a terrible misunderstanding and we were better from that point on about how to communicate in the moment if a situation changes.


Q: Where’s the line between feeling jealousy and deriving pleasure at with all this?

A: I think there’s always going to be jealousy for me, but then there’s the period afterwards where the jealousy fades and the ‘actually, that was pretty hot’ kicks in.  I get less jealous watching someone get her off than I do watching her get someone else off - a few weeks ago I held her down while another guy flogged her and a girl ate her pussy and loved that.

The biggest pleasure for me is knowing I’ve given her the freedom to explore her filthy side - and that outweighs the jealousy I might feel.


Q: What kind of girl were you like in your college years? Have you always been confident about exploring and expressing your sexuality?

A: I was a hermit!  I lived in university residence but almost never went to parties or out drinking (although to be fair I wasn’t legal to drink anyway).  I was a serial dater, though, so I worked my way through a decent number of men in that cozy little dorm room.

Some people said I gave off the ‘innocent’ vibe - but fellow kinksters said they could always tell that there was something filthy underneath.  I drop hints.  Not always subtle, though, as Mr knows - given that the first time we ever talked one to one I asked him if he thought he’d ever join a blowbang!

I’ve always been confident and sexual - I thank my mom and her feminism for that.  Growing up I was always encouraged to love my body, flaws and all, and to not be afraid to be a sexual person.  No slut shaming in my family home!

Q: What is it that appeals to each of you about the Mrs. being so filthy?

A: Mrs: I’m a pleaser and a show off, I love turning people on and getting the attention of people who find me sexy.  I’m a big fuckin’ tease. Mr is such a filthy pervert that his attention alone satisfies me so much more than previous partners, but the fact that he lets me show off with others is a bonus!

I love that Mrs is on the same wavelength as me, and she takes care of all my wants and needs - she lets begs me to fuck her rough, in the ass, in front of others, after she’s deepthroated me and licked my ass.


Q: What it like having your naked body on the internet for millions of people to see and get off to?

A: It’s a rush!  I love seeing my Twitter blow up with messages and likes when I take a particularly sexy picture.  I find myself thinking about what angles I should try next, where in the house, what should I wear, etc.  A decent number of our pictures are screenshots from video chats so they’re not planned out, but I still love creating that ‘scene’.  I need to do more with heels.  Remind me later.


Q: Have you ever shown off for or in front of the friends of the Mr.?

A: Yes!  Several of his friends have seen me naked and some of Mr’s friends have our Twitter account, which is pretty wild.  Mr says you can go one of two ways - proud or protective - and he’s in the proud camp.  He loves to show others what he gets to come home to.


Q: What’s the filthiest thing the two of you have ever done together?


Q: What are some of your current favorite TV shows?

A: Stranger Things, for sure - Bojack Horseman, Archer, Game of Thrones, West World, and Mrs has a weakness for Jane the Virgin.


Q: Do you consider yourselves as living the hotwife lifestyle? If you don’t, do you think you’ll progress to that point some day?

I’d like to thank Mr & Mrs for being willing to give us such an in-depth look into their sexcapades. I also wanted to take a moment to point out to everyone reading this interview that even a couple who gels so well together makes sure they go about exploring the less traveled (but way more exciting) path the right way, which has a lot to do with 1) open, honest, respectful communication, and 2) with putting their own relationship first.

They’re doing it right, and they’re enjoying it right. I see a truly fun and fulfilling life ahead for these two, and I can’t wait to see where their journey takes them next. If you want to know more about them and see some genuinely amazing amateur pictures of the Mrs, I definitely suggest you take a look at @FilthCouple’s Twitter which can be found here: https://twitter.com/filthcouple

And here’s the full size version of the featured picture they took just for us: 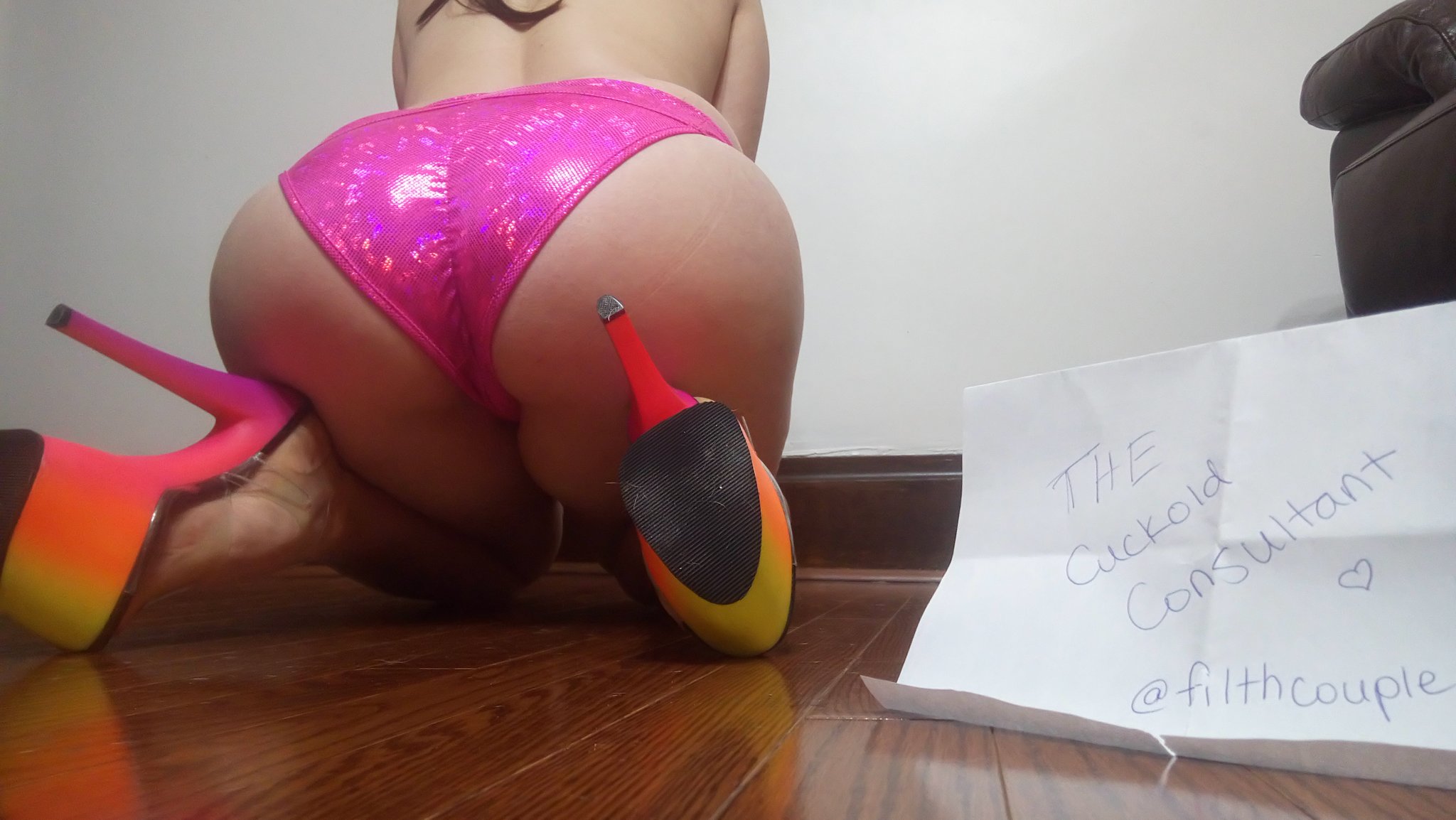