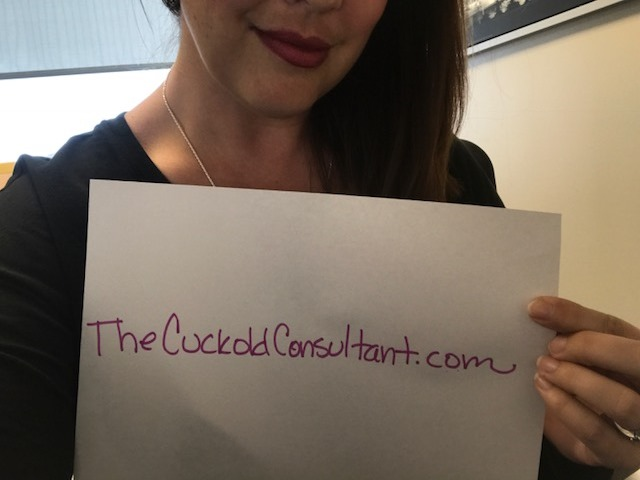 Why try to re-describe in your own words a sexy, articulate soccer mom who has already perfectly described herself?

“Blessed to have the freedom to pursue my sexual desires…. whatever those may be. Married with 3 kids. Gemini. Switch. Bi-light. Baby Girl. Kitten. Domme. Vain as heck. Insecure most days. Love erotica, wine, shoes, good conversation, and I’m a little obsessed with Manuel Ferrara.”

If that doesn’t entice you to want to know more about her, then the problem is you.

Kidding. But not really.

Q: On your Tumblr, you mentioned you have the freedom to pursue your sexual desires. How did this come about in your marriage? Whose idea was it? Did either of you have reluctance about what it would mean if you let other people into your relationship?

The blogs were strictly about sharing things for each other. We started talking more about our fantasies and while we didn’t necessarily have the same interest in certain things, we were both getting more turned on. The more we talked about things, the hotter the sex got at home.

When he started talking about having another person involved, he suggested another guy. I was IMMEDIATELY dubious… wondering if this was all a ploy because he really just wanted to have sex with another woman or something like that. Turns out it was just his fantasy. I kept asking, “Is this because I’m not enough? Do you need someone involved?” and he was wonderful at reassuring me this was just his fantasy and always had been. He wasn’t looking to find another woman.

We finally found the right guy, the right couple… things all worked out right and it started a new phase of our marriage. Having another man involved was great. The chemistry was great, the dynamics were great, J got to watch me (fulfilling his fantasy), and I got to be treated like a goddess.

When it came to adding another woman, that was different. I realized that watching J with another woman isn’t my kink. In exploring these things together, we’ve learned so much about ourselves and each other. We had to learn how to navigate the balance between our marriage relationship and the “other” relationship.


Q: Do you consider yourself a hotwife in the traditional sense of the word?

He likes me to have sex with other men. He likes the confidence I get when I go from introduction to sealing the deal. We aren’t into mixing with couples, going to sex clubs, or parties. We’ve decided that it isn’t our thing so I guess you can say we’re not swingers. I’ve met with people from Tumblr and other sites. I consider myself a hotwife… so I suppose the answer is “yes”.

A: This makes me smile. I’ve joked that because my astrological sign is Gemini, I’m double sided. Domme and sub, angel and devil, prude and dirty, dirty slut. Both sides are very fun aspects of my sexual personality.

The dominant side has been about power. There’s amazing power in holding pleasure and pain at the same time, commanding attention or obedience with the tone of my voice or posture, or allowing release versus denial. This power has been fun to explore and develop. I have a secondary blog that I keep in addition to this one. I want that side of my personality kept separate so there’s no cross over.

As far as submission, I have found that I submit naturally. I haven’t had a true real-life D/s relationship. The only thing that I’ve been unable to find is that sexual experience that truly silences the constant chatter in my mind. It’s been the biggest barrier to submission in my experience. I love the imagery but have yet to experience it in practice.


Q: A lot of women struggle with their sexuality for years after having kids and starting a family, but you have three kids and are still exploring your sexual desires. What factors would you say have contributed to you having a more than average sexual appetite, and how big of a role does your husband play in this?

A: Who says mine is more than average?  Hahaha.

I was very sexual in my 20’s. Then marriage and kids happened. I don’t know if it was hormonal or what but I lost that drive. I’m sure it’s somewhat normal as motherhood became the priority and sexual wife-hood just took a backseat. It led to some very tough years but my husband and I stuck through it.

A few months before I turned 39, a guy who worked in another state for my company began flirting with me and told me I was stunning. It changed me in a way I didn’t expect. I didn’t think I was stunning. I didn’t think anyone thought I was. I hadn’t felt anything like that in years. I realized I hadn’t felt much of ANYTHING for years… I had become invisible. I was mom. I was wife. But I wasn’t ME.

It was the beginning of the awakening and it got us to where we are now… I’ve embraced my sexual side, J encourages me, our marriage is stronger for it. His encouragement is everything. I know I should be all tough and feminist and say that I don’t need it but I do. I need his encouragement.


Q: Most couples have problems maintaining a normal, vanilla relationship, let alone one that explores some of the things you and your husband explore. What are 3-5 things about your relationship that have contributed to your success in being able to do so?

A: 1) Communication is the most important. I’ve been contacted by husbands asking about how to “get” their wives to do what we do and it’s been the first piece of advice. Communicate. Be open. Be honest. Be raw. These are emotional things and even though you don’t want emotions to enter into an “other” relationship, they do. You have to keep open dialog with your spouse. J and I have gone through rough times since we started playing and it’s because we stopped talking about things.


Q: Do either of you ever have any moments of doubt regarding your exploration of your sexual desires?

A: I doubt myself often.

I’m not in the physical shape I would like to be in.

I have had times where I don’t think I’m hot enough or whatever.

I’ve gotten VERY insecure over J’s play in the past.

I developed feelings for the first guy I we were with as a couple.

All of these things come into play with our desires and the things we do. I had to be honest with J and he was VERY understanding. That initial couple relationship was something we’d never experienced before and we (I) had to learn how to balance while allowing myself to feel. I didn’t think I could care so much for someone while still being faithful to my husband. J helped me work through that. I didn’t care for our others in place of what I felt for J. It was in addition to my love for my husband. It was good.

I know he’s coming home to me. He knows I’m coming home to him. That’s our bottom line. What we do doesn’t replace what we have. The moment it does… we’re done playing.

A: OMG I LOVE BOOBS. Lol! That’s honestly one of the best things about women. They’re soft, kissing is amazing, and then the boobs. Damn. I get why guys are into giving oral… a woman is so responsive. The way our bodies are made, I know what I like and I try to do it to her. Being with a woman is more sensual. More making out. Things I love.

Don’t get me wrong. I love guys and if I have to choose, I’ll always choose dick. But… if I don’t have to? I’ll take both!


Q: What are some things you’re going to do to make sure you both continue to prioritize your own relationship and grow closer together while exploring this lifestyle?

A: Do vanilla things together. Go on dates, laugh, hold hands, have Netflix binge sessions, work on projects together. BE a couple. Do kinky things together. Explore with each other. Talk about fantasies because they do change over time.

J always wanted me to tell him sexy stories and I just didn’t have any. Now… I have learned how to tell him about my fantasies and my “exploits”. It was hard telling him at first because I was still nervous about how he’d take it or what if I said something wrong. But as time has gone on, I have gotten better about telling him about a date. He loves it and shows me. I can tell him stories of things I’ve done or fantasies I have. That just heightens our private times together.

I’d like to thank @forhispleasures for taking the time to do this interview with us. It’s not everyday that you meet a woman who has this many sides, and is willing and confident enough in herself and in her relationship to explore them. If you haven’t already, check out her Tumblr (which you can find here: http://forhispleasures.tumblr.com/ ) for some pretty cool content, and of course for some sexy content of her.

A shout-out as well to her lucky husband! Perhaps if we’re lucky, we’ll get to hear from him as well ;-)