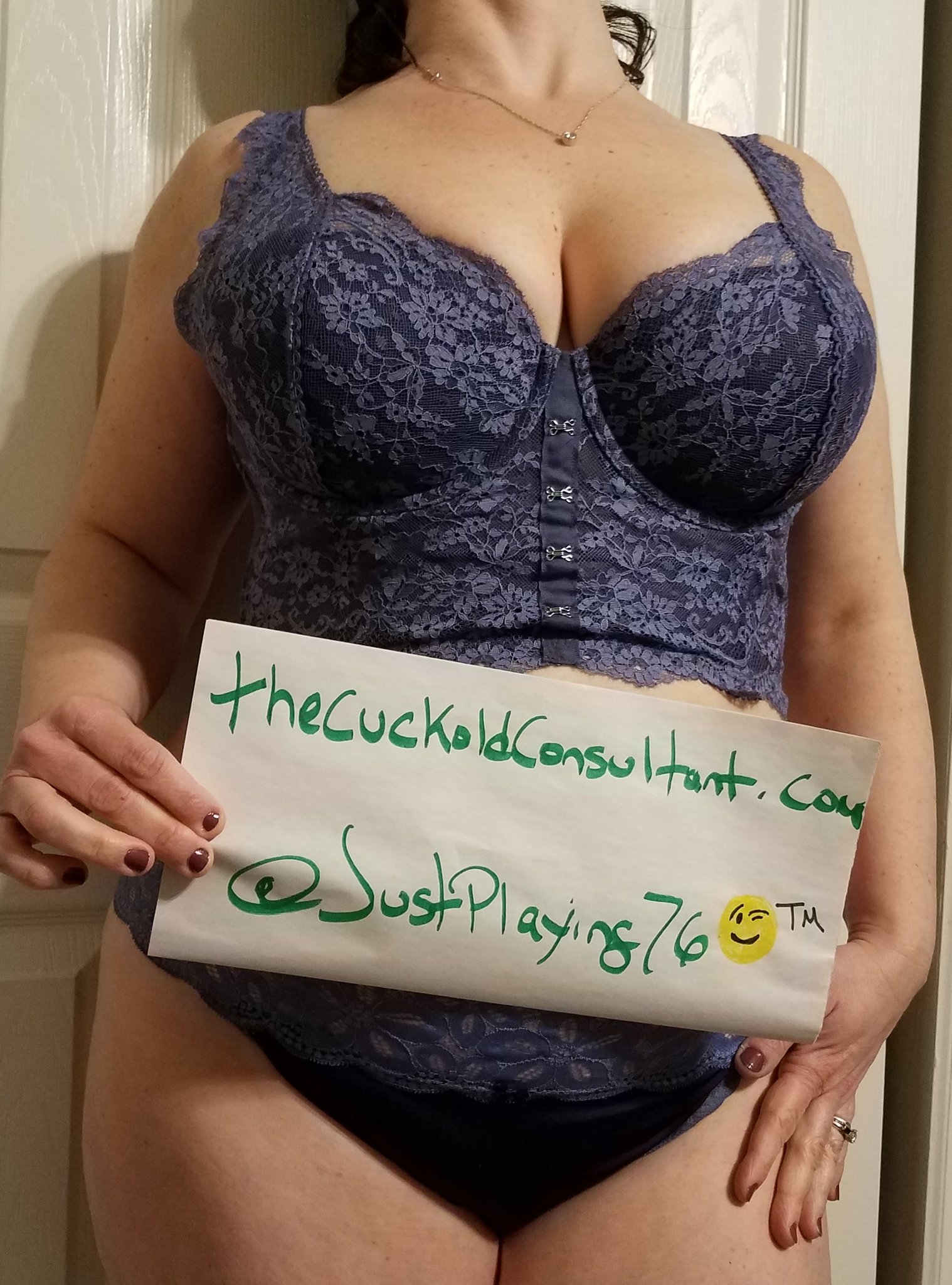 What is it that makes 118,000 people follow the Stag & Vixen Twitter couple who goes by the name OurLittleSecret?

Well for starters, maybe it has something to do with the fact that the hotwife/vixen in the couple has one of the sexiest smiles I’ve seen. There’s something coy about it, something…naughty. I can’t do it justice explaining it though, it’s something her pictures illustrate much better than I could ever describe.

I have to be honest though. I think it might have a lot more to do with her tits. Does that sound crude?

Maybe you think I’m exaggerating. But then again, it’s not that common for a normal suburban couple to have 71,000 followers on Twitter, is it?

All fawning aside, I reached out to them to see if they’d be open to doing an interview about how they live the hotwife lifestyle, and lucky us, they agreed to do it. Take a look for yourself:

Q: So whose idea was it to get into the stag and vixen lifestyle? How did the topic come up, and what was the process like going from fantasy to reality?

A: Vixen - It was my husbands idea. He used to encourage me to talk about it when we were fooling around. Eight years later he had opened a Twitter account. He was asking if there was anyone that I would sleep with. When I told him about a coworker, it kind of started things. We took some pictures for fun, he put them on Twitter, and it just snowballed from there.

Stag - To be honest I was really nervous to bring up the subject first. I didn’t know how she would react. So I brought the subject up one night while my wife was jerking me off in bed. She thought I was crazy and that I couldn’t handle it, that I would be too jealous. I think part of her also thought that I was doing this so that I could sleep with another woman. Which Wasn’t the case. It was an eight year process. It didn’t happen overnight.

Q: Some men “look down” on other men who are willing to let their wives sleep around. Others “look up” to men who explore the hotwife lifestyle. What would each of you say to these different groups of men, and how do you feel about yourself regarding your willingness to share your wife?

A: Vixen - Everybody has their own opinion and interests. We do ours together. My husband watches and sometimes joins in. It can be a challenge if your relationship is not strong. We had a few bumps, but overall it has been quite fun.


Q: What appeals to you about your husband showing off your naked pictures on twitter? A: It is nice to get positive attention. In some ways it has helped me be a little more confident in my daily life.


Q: Do you think your wife would stop hotwifing if you asked her to? If not, would it turn you on knowing you no longer would have control over this journey?

A: I think she would stop if I asked her to. Although when I read the question to her she kind of smiled at me which leads me to believe that I may have bitten off a little more than I can chew, LOL!

Q: What was your first time like for each of you?

A: Stag – I wasn’t there the first time my wife and her friend had sex. She wasn’t comfortable with being watched just yet. So I gave her the space. I went to the movies that night however I cannot remember any part of the movie. It was a very anxious evening for me.

Vixen – for me it was extremely different because I hadn’t been with anyone else since I was younger. My husband and I have been together for 23 years.

I met my friend on Twitter, he wasn’t someone I knew before that. We talked for about a month on Twitter before he asked me out for coffee. We went out like 3 or 4 times before even getting to that point. The first time he was making sure I was comfortable, repeatedly asking if I was OK and ready before doing anything. He was good about making sure I wasn’t going to regret anything.

As for in the bedroom, he was good, it was true fucking the first time. It definitely got even better once we got to know each other more.

We would meet up a few times a month for a while. Schedules and life has made it a little more difficult recently. But we still get together whenever we can!


Q: Do you ever worry about your wife wanting to leave you for one of her lovers? If so, how do the two of you make sure this won’t happen, and if not, what have the two of you done to foster that level of security and commitment?

A: In the beginning I did have some worries about her wanting to leave me. As time went by those fears went away. When we first started we both said that this was just for fun. Our life and our family was the most important thing. This was just a supplement, something exciting. Something to break up the monotony.

Q: What are 3-5 of the most significant ways living this lifestyle has positively or negatively impacted your relationship?

A:We have our own little inside jokes which makes things fun when we are around others. We give each other looks and know what the other is thinking.

We definitely feel closer to each other. We always had a great relationship, with having a few kids and jobs and everything else that comes along with the Vanilla life we definitely make more time for each other, whether it’s meeting for a quick lunch during the week or a romantic dinner, or a long weekend away with out the kids, lol.

Oh and then there’s the sex….we definitely have way more sex than we used to! Although I do joke with my Vixen that she has more sex than I do, Lol.

Q: What advice would both of you have for men who are hesitant about bringing up the topic of hotwifing to their wives?

A: They can just bring it up as a fantasy in role-play. It doesn’t have to be presented as the next step in a relationship. And communication. Communication is very important in the lifestyle.

Q: What are some things you’re going to do to make sure you both continue to prioritize your own relationship and grow closer together while exploring this lifestyle?

A: Again it all comes back to communication. Having open dialogue and not being afraid to tell each other what we think. And Making sure that we’re always having fun together. That lets us explore the lifestyle safely.

Q: Do either of you ever have any moments of doubt regarding your exploration of this lifestyle?

A: Stag – I’ve definitely had my moments of doubt. It hasn’t always been easy. You really have to have good communication with your partner. This is not a lifestyle that’s going to save a marriage; it’s more something that you do to accentuate what you already have.

I also struggled with what people would think if they found out. Me being considered less of a man. Or that I had a small penis. Or that I might be gay or bisexual. Which wasn’t the case. I just find my wife completely sexy and really enjoy watching her with another man. I don’t really think I struggle as much anymore with it. Although the other night my Vixen went out with her friend for the first time in a long and I had some feelings of anxiety. There’s also those feelings of jealousy that every now and then show their ugly head.

I guess as far as jealousy was considered I think it had to do more with me not always being able to be there. We have two kids so we couldn’t always go out together. A good bit of time she would go out with him by herself. So I sometimes felt left out of the things. In my mind I thought this would just be sex. I don’t think I was fully prepared for the emotional part. But my wife’s not the kind of person just to jump into bed with a random stranger; she needs to have a connection with the person she could trust. So it actually turned into more of a relationship with her and her friend. So I struggle with that at times. That’s where the communication we had really helped.

One of the other moments of doubt had a lot to do with us telling a handful of our friends what we were doing. Their opinions would muddy the water, and make me think we were making a mistake. So we pretty much told all our friends that we stopped being in the lifestyle. It was better to keep the vanilla life separate from the lifestyle.

Vixen – At this time I do not have any regrets. It has been fun so far. I am looking forward to us seeing my friend again, and meeting some new friends!

Q: What are some of the biggest challenges the two of you have faced regarding living this lifestyle?

A: You have to work through some trust issues in the beginning… And in the middle. And it can be tough hiding it from others, sometimes it’s so much fun you want to tell others what you are up to but you can’t.

Vixen – I don’t actually call or think of myself as a vixen. It’s a term my husband gave me. But I’m definitely having fun with it. I guess my Husband was right!

I did a lot of talking about the Vixen of the couple in the introduction, and for good reason. That said, I’d like to close the interview by tipping my hat to the Stag of OurLittleSecret.  Why? Well for starters, because he landed this awesomely naughty woman for a wife! He must be doing something right, eh?

All jokes aside, I tip my hat to him because it takes courage to overcome your own reluctance and fear to bring up this fantasy to your wife; because it took patience to hang in there for a whole 8 years until she finally got on board; because it takes confidence and a lot of security/trust in oneself and his relationship to continue to explore this lifestyle when you get bombarded with internal and external doubts. Plus he seems like a really cool guy.

I’d like to thank both of them for taking time out of their lives after they’ve put their kids to bed to answer these questions. If you haven’t checked out their Twitter yet, I highly encourage you to do so because you’ll finds all kinds of explicit pictures of the Mrs. on there. It’s worth the visit and can be found here: https://twitter.com/Justplaying76

I’ll leave you with this fun little “easter egg”: they used their kids’ markers to make the sign they’re holding for the interview. I don’t know what everyone else thinks of that, but personally, I think it’s freaking hot! ;-)