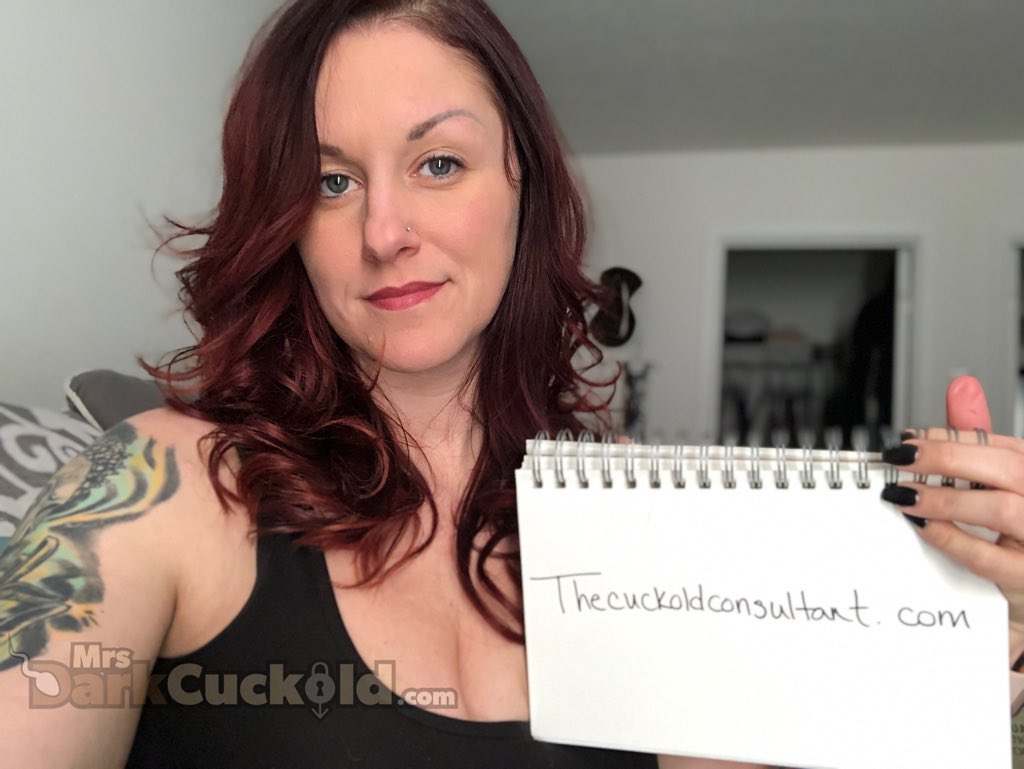 On a scale of 1-10, how interested would you be if I told you our next interviewee was a down to earth, thick and curvy, pierced and tattooed gamer-girl who loves cuckolding her husband because of the power it gives her?

If this sounds like your type of woman, then enjoy the next few minutes getting to know Twitter sensation MrsDarkCuckold as she tells you a bit about her past, her sexuality, and her lifestyle Enjoy!

Q: What’s your backstory? How did you get into the cuckoldress lifestyle? Whose idea was it and how did it progress into what it is today?

A: My husband and I met 6 years ago on POF (Plenty of Fish). I pursued him. We talked for about month before meeting one another. At no time did we ever talk about sex. We had a quick lunch date and that night I went with some friends drinking. I got a little drunk (a lot drunk) and while texting I told him I had something to tell him. I confessed to being bi. Seems silly right? Well, there are a lot of men that’s a deal breaker for. He was completely fine with it of course.

So, we chatted about that some, then I went further and said I had something else to confess. I told him I had always wanted to watch my boyfriend get his dick sucked by another woman! He said, I’ll tell you what let’s meet for lunch tomorrow and chat.

Next day lunch, we jumped in right where we left off. I went into more detail about what I had always fantasized about. That’s when he told me he liked to see the women he was with fucking other men.

I looked at him like he was crazy and exclaimed so. He laughed and asked, you do realize what you just told me, right? He began to explain more in detail, told me about cuckolding. I had never known anything about it. I loved it all. That ended up being a 3-hour lunch date!

He had been in the lifestyle since he was 18, and since all this was new to me I was more than willing to do things as he liked for us to build trust in our relationship.

After he did, he said tell me again, so I started over. I got half way through before he came again! This was the affirmation I needed to know me doing this really was ok. It was exhilarating, and I definitely wanted more of this power.

Q: What are three of the best things that turn you on the most regarding living the lifestyle as you do?

Q: Where do you draw the line between what you will and will not explore? What are some things you haven’t yet explored, and why haven’t you done so?

A: I don’t know that there has ever been a line to draw. We keep a very good line of communication open and talk about the what if’s and fantasies that could become reality.

Q: Related to the above question, many people who explore this lifestyle wind up needing to push the limits further and further. It almost becomes like an addiction. How do you and your husband maintain healthy boundaries?

A: We are both switches, meaning we can play either role Dom/sub. I feel this helps break things up if it becomes too much for the other. Or we do neither and take a break.

Q: Everyone in the lifestyle always talks about the importance of communication. Would you agree that communication is important, and if so, what’s your take on WHY it’s so important?

A: Without communication there is no healthy relationship, period. There are always boundaries and eventually we want to push those boundaries, but there must be a lot of conversation to get there. During sex, things can be said that are extreme. Afterwards we talk about it; was that real, did you mean that, would you really want to try that, are you ok? All very important. Also, when someone is being pushed down, humiliated, degraded, there must be comfort as well. He is my husband before he is any of the other things and I love him dearly. I would never jeopardize our relationship.


Q: What would each of you say was your “hottest” experience?

A: The first time he ate my pussy while I was being fucked. It was amazing. I never came so hard and the guy who did it pulled out and came down his throat. It was fantastic. And he could feel him swelling up in my pussy. We’ve had other situations since but you never forget the first time.

Q: What’s the most amount of men you’ve ever had sex with at the same time? What was that like?

A: 7 total in one night. 2 together earlier in the night (brothers), then 5 later that I started playing with in the hallway. I brought them all to the room, laid down the rules and how and how things were going to go. It was very powerful, they were all at my whim. They would gladly do anything I told them. Of course, in the videos it looks like they are in control of me, but that couldn’t be further from the truth. I have moments I crave those times.

Q: What are some things you like to do for fun besides having sex?

Q: What as your favorite TV show as a kid, and why?

A: I didn’t watch much TV, I was usually outside. But I guess I enjoyed watching Punky Brewster (if that doesn’t show my age, haha) and the Simpsons.

Q: What were you like as a teenage and college age girl? What experiences, if any, were formative ones regarding the life you live now?

A: The first time I had sex I was 16. After that I wanted it a lot. I can remember what would have technically been my first train. I had 3 guys come fuck me one after the other. I didn’t feel shameful at all. Made me want to try 2 guys at the same time. But that didn’t happen till much later.

I didn’t go to college at the normal age because I went in the Army at 18. But I can tell you it was a lot like college. I finally got my first experience with a woman. I had known at a young age I wanted women as much as I wanted men, but I grew up in the 80’s and 90’s not something you let people know about. I got a lot more black men once I was in the Army. They were, and still are just drawn to me.

Also, in my early 20’s couples began approaching me to be with them. It was like it was written in my forehead. I had no idea the term “unicorn” even existed. But I loved it, mostly because I loved being single and I got the wives all to myself often. Carried on relationships with them over time. I fucked whoever I wanted, I never really limited myself. Race and age weren’t something I considered. Black, white, Hispanic, Asian.

At 22 I fucked a guy that was 42. Fucking the older guys “broke me in” and taught me how to really please a guy. Then the young ones were at my feet. I always felt the power in me, wanting to be over someone, but never finding someone to do it with.

I want to thank MrsDarkCuckold for taking the time to do this interview with us. If you haven’t already, I highly suggest you check out her Twitter (found here: https://twitter.com/mrs_darkcuckold ) and her website (found here: MrsDarkCuckold). There’s some pretttttty awesome content in both places ;-)