If things like complete obedience, moderate to high humiliation, cum-eating, and folding the clothes of your wife’s lover are up your alley, I encourage you to read the following interview. By the end of it, you’ll be envious at worst, and extremely aroused at best. Enjoy!

A: I began with honesty and confessed my interest in the lifestyle.  She was a “hard no” when it came to sleeping with another man because she believed in being a faithful wife.  But she has an open mind to try new things and was willing to at least dress the part since she has always turned heads and loves looking attractive.

We both were very naïve but enjoyed learning about the lifestyle and she really got into the dressing sexy and wearing the HotWife anklet.  From there we got into me wearing a chastity device, her wearing a key in public, her controlling sex, and the use of denial.

Time, me doing endless chores, her being treated like a goddess, her leading the relationship and the excitement we both had with the imaginary boyfriend eventually turned into reality by chance. The guy that became her real life boyfriend involved a lot of luck as most of what we read seems to support that too many guys flake out or true “Bulls” don’t really exist.

She met him at the gym and he was much younger, partially black, and a very well-mannered and respectful gentlemen. He matched our fantasy boyfriend almost perfectly and their connection had very strong chemistry. Since I had given the green light and she was loving his attention and sexual energy the moment came where he asked her out. We talked it through and they met.

That night she slept with him, and decided she wanted to keep seeing him and live the full role.


Q: What draws you to playing the more dominant role in your relationship with your husband?

A: One word: “control”.  I am in charge and everything is my way. I also enjoy keeping him off balance and rewarding him when he is good. As far as a turn on, my happiness is always getting my way and the house runs the way I want it to. Our marriage is very strong and we spend time together like it was when we were young because we rekindled the passion from when we first met.  This only came to be after we learned and explored our current situation.


Q: Can you tell us a little about you cuck-signed agreement?

A: We drew it up sometime ago and at the time we really got into more of the fantasy of it vs the reality around her being a HotWife . We had playful fun with it because at the time she was a “No” to sleeping with other men.

I counted 30 items we added to the agreement of which 24 actually really have to do with either me (husband) being submissive or doing items of housework. These items we pretty much stuck to as it was the beginnings of what eventually became our Female Led Relationship.

Amazingly we are now fully living the part.

A: She: I actually feel sorry for him when I see him locked up. His balls look all scrunched up. I do like the idea that he can’t get out and I have the key which is usually miles away from him while he is at work. All part of me being in control.

He: I was amazed at the transformation my mind had when I started wearing it.  I think of it as my cock is in check and for the 1st time since pre-adolescence my mind is running the show. I’m sure there are studies out there on this but everything is clearer and my focus is unbelievable.


Q: You have a lot of pictures of yourself wearing the key to your husband’s chastity cage around your neck. Do you ever wear it in public, and has anyone ever ask you what it’s for?

A: I almost always wear it in public as well as my “HW” HotWife anklet.  But curiously no one has ever approached and asked about them.  I don’t have any prepared responses because if and when it happens I want the circumstances and the person asking to determine the reply.


Q: In your opinion, what are 5 components to a healthy Female Led Relationship?

As for the control part, I know this sounds cruel but men are very easy to control once you control their orgasms. How do I that?

His orgasm is a reward and he only earns that if he makes me happy. And I am only happy if he is obedient. And I make him obedient by denying his orgasms unless he earns it by pleasing  me. What pleases me?

When he does his chores, treats me with respect and does everything I tell him to do without complaining. And what makes him happy?

Earning his orgasms and knowing I am in charge, I am calm, I am running the household and I am caring for his well being.

But I have reprogrammed his mind to become so submissive and so obedient that he tells me he feels love for me everyday as if he has returned to the day he fell in love with me. And then I took his love to a higher place. He tells me he loves me so much that nothing makes him more happy than knowing another man is pleasing me more than he ever could.

Imagine that?  A man who loves you so much your own sexual gratification is a higher priority than your fidelity.

For me I was bit of a slut when I was younger. I loved  the chase, the flirting, the experimenting and everything that came with the variety of men I experienced. But I soon knew I needed the stability of a good man to support the household. Currently I have the best of both worlds. I have my Beta man who owns my heart and my Alpha man who allows me to indulge myself.

[Him]:  I am truly enjoying all the excitement of having a HotWife and love the thought of her fucking a younger man with more stamina and a bigger cock than me.


Q: How would each of you explain the appeals of a female led relationship to a couple who didn’t understand it?

For me, I was in a long term relationship prior to our marriage with a very controlling man who didn’t value my opinion.

For him, he works as a high level manager in a fast paced Alpha male job that has a lot of stress and decision making.

So in our current FLR I feel very valued where my opinions matter and I get the respect and control I lacked for a very long time.

For him he gets to escape from his demanding job and let his mind relax.  All he has to do is focus on pleasing me which is wonderful because I feel all of his love.


Q: What are the 5 most “humiliating/teasing” things your wife has ever done to you?

A: 1)  Daily life: I make over 6 figures but have relinquished all my debit and credit cards to her. I get $20 a week in cash from her which she places in a pink box each Monday. She also picks out my daily clothes and makes my lunches which usually includes kids snacks. In my lunch she also leaves notes that remind me about my small cock or how much better her boyfriend’s body, cock or sex is.

If we go out she drives and when we sit in a booth I must slide in 1st so she gets the outside.  She likes to feed me too so others see me look submissive. All those are just to name a few.

After I pay I am required to wait for the right moment so they see me handing the card back to her.  She uses any opportunity to also verbally humiliate me during this moment.  For example, recently we were buying clothes and the clerk asked if we wanted to apply for a card for a 10% discount to which she replied, “Why would I care about that? It’s his money I am spending”.

The times I carry it are always around either men in authority, tough guys or Alpha macho types.

We on several occasions have gone shopping to buy him clothes, underwear, shoes, cologne and anything else she wanted him to have or  wear. Sometimes it’s a present she picked out or flirty card. Often these items are either left hanging in his area of my closet or folded neatly in his draw by me. I must also wash his clothes including his underwear.

I always must carry to the cashier what she picks out and pay for them with my credit card that she hands to me as per #2 above.  All the while she is saying things like, “He will look so good  in that,” or, “Can’t wait to rip that off him”.

With the cologne she picked out, she made me tell the clerk it wasn’t for me but her boyfriend. She works from home so sometimes she invites him over and they fuck on our bed. She has him wear the cologne so later when I go to bed I smell him along with their sex.

She always wears her key and HotWife anklet and likes to flirt with guys knowing I can see her. Her boyfriend goes to our gym and sometimes they work out together. I have to stay clear by doing the treadmill and watch from a distance. He enjoys assisting her fun by touching and caressing her knowing I am watching.

Sometimes they kiss. Or sometimes both look at me and giggle. Sometimes she will text me to tell me she is going with him to his place after their workout. I actually love the feeling as a good cuck would but there is also the sting of humiliation.

I’d like to thank Hotwife@husband for taking the time to indulge us by giving us a privileged look into their Female Led Relationship / Wife Led Marriage. As you can see, venturing down roads like this can take time, but if you’re patient (and lovingly but respectfully persistent) enough, the reward is living a lifestyle which affords you the experience of pleasures (both surface level and deep-level) you never dreamed possible.

Last but not least, for random yet related musings regarding cuckolding, hotwifing, and FLRs, and real-life personal sexy pictures of the hotwife in Hotwife@Husband, then I highly encourage you to check out their Twitter which can be found here: https://twitter.com/cuck_sub 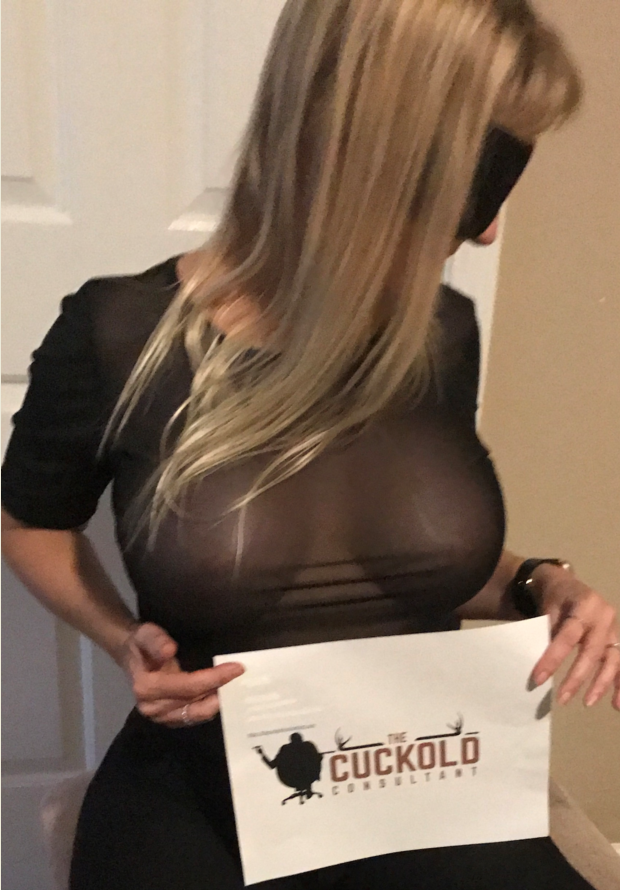