The couple in this interview has been together for 25 years, and for 20 out of those 25 years they’re been in the hotwife lifestyle. What’s perhaps most interesting in my opinion is how a “soccer mom” with a full time job and family has been able to have this much continued success in the lifestyle.

This isn’t to say married mothers can’t have continued success but rather the challenges that many couples face are often reasons for their journeys to stop or die out. The wife is one-half the composite of the couple Hotwife4oldermen though has been with over 100 different men, and the husband has been documenting her journey.

I’m sure you’ll find reading their story interesting, so without further ado, enjoy!

Q: How did the two of you get into hotwifing/cuckolding lifestyle? Whose idea was it, what was the other’s reaction, and how did it all progress to what it’s become today?

A: Before we were married she told em she wanted to try a 3 way FMF and this was the late 90’s so it was impossible to find someone. So like everyone else we started out swinging. She quickly learned she wasn’t into other women. She then said she wanted to try a MFM 3 way with me. And we did it a few times and I remember sitting back not joining in and loving it. Then I found a website Hotwife Jackie and that changed everything. It was hard for her to understand at first but she embraced it quickly.

Q: Most guys have a hard time getting their wives to embrace their submissive side in their own bedroom when it’s just the two of them. How have you managed to get your wife to embrace it with others?

A: I take pictures and video 80% of her dates and it’s like watching a game film. I notice she had submissive tendencies, and when she is caught up in the morning she seems to embrace it more. However when she is with me in our bedroom she’s not as submissive. It wasn’t until after 10 years she really embraced it.

Q: Most women say they want/need some kind of emotional connection with a man before she sleeps with him. Is this true for your wife, or does she prefer it to be more of a “stranger” fucking her kind of encounter?

A: It really depends on her mood and where we are at.  She loves both. If we know we want to meet someone for a possible long-term relationship then there definitely has to be a connection. If we are out in another town like Vegas and go to a club then we are fine with a one night stand.

Q: How many hotwife experiences would you say you’ve had up until this point? Can you give us details on one or two of the most memorable ones?

A: It’s easily over 100.  We usually like to go out once a month and try to meet up with 2 bulls in one night.

The second was end of February this year; we just set up a quick meeting with a new person and she ended up in the backseat letting him finger her and then she sucked his cock.

Q: What are 2-3 of the most “extreme” submissive things your wife has done, and what were those experiences like?

A: 1) Doctor office exam in a real Doctors office

Q: Many couples don’t know where to start when it comes to finding a bull. Is there any kind of streamlined process you follow now to increase the odds of 1) finding someone real, and 2) finding someone suitable?

A: That is why I handle all the initial contact. We use swinging sites and craigslist was great before they shut it down. What I do is give them the basic information about us let them know it’s me the husband. Once I get a feeling they are real then I show my wife who I’m talking to, show her the pictures and emails, and if she likes what she sees then we go forward with setting a date.

Q: Are you always there when your wife plays with other men? If so, do you have to reject a lot of men who aren’t open to this? If not, what’s it like knowing she’s out on her own with another man getting fucked by him?

A: Yes I’m always there and one of our things are if you want to play with my wife you have to let me take pictures and videos. However after we have met somebody and been with them a few times and there’s a really good connection I do let my wife play alone. Just as long as she has a camera set up.

A: There’s something about older men that she likes. We have tried playing with younger guys and there have been a few but most of them flake out or can’t rise to the occasion.  She likes how they are mature and they’ve already been around the block, they know what they want and have a dominating side to them.  Also so much of this is centered around BBC, we decided to share our experiences bring something different to the lifestyle.

Q: Can you describe what 2-3 of the biggest emotional turns on are for you in exploring this lifestyle with your wife? (I.e. angst, control, lack of control, jealousy, etc.)

A: When we first started we had a rule that there’s no kissing on the mouth and after one experience we both quickly realized how boring that was. I learned that my turn on is being jealous and I tell her and her bull that their goal is to make me jealous. And watching her submit to another man and do something she normally won’t deal with me is it an adrenaline rush I can’t explain.

I want to thank Hotwife4ldermen for taking the time to do this interview with us. If you’re interested in learning more about them, I highly suggest you check out all their sites which can be found here: https://linktr.ee/hotwife4oldermen

P.S. Funny story. As you know, we take great care to ensure that we only interview authentic people who are willing and able to demonstrate their authenticity. When Hotwife4oldermen sent the proof pic, I asked my forensics guy to check it as per usual. His analysis came back with a few concerns about the first pic they sent because there were a few things he couldn’t quite figure out; it wasn’t that we necessarily thought it was fake but rather we didn’t want to only use a pic we had concerns with, so we asked for another.

They obliged and went above and beyond, by sending a video of her writing out the sign, and then a pic of her posing with it. I want to extend my thanks and appreciation to them for being understanding that we do the best we can when trying to keep our content as authentic as possible. They were really cool about it!

You can see all the proof pics below, including a full size NSFW one. 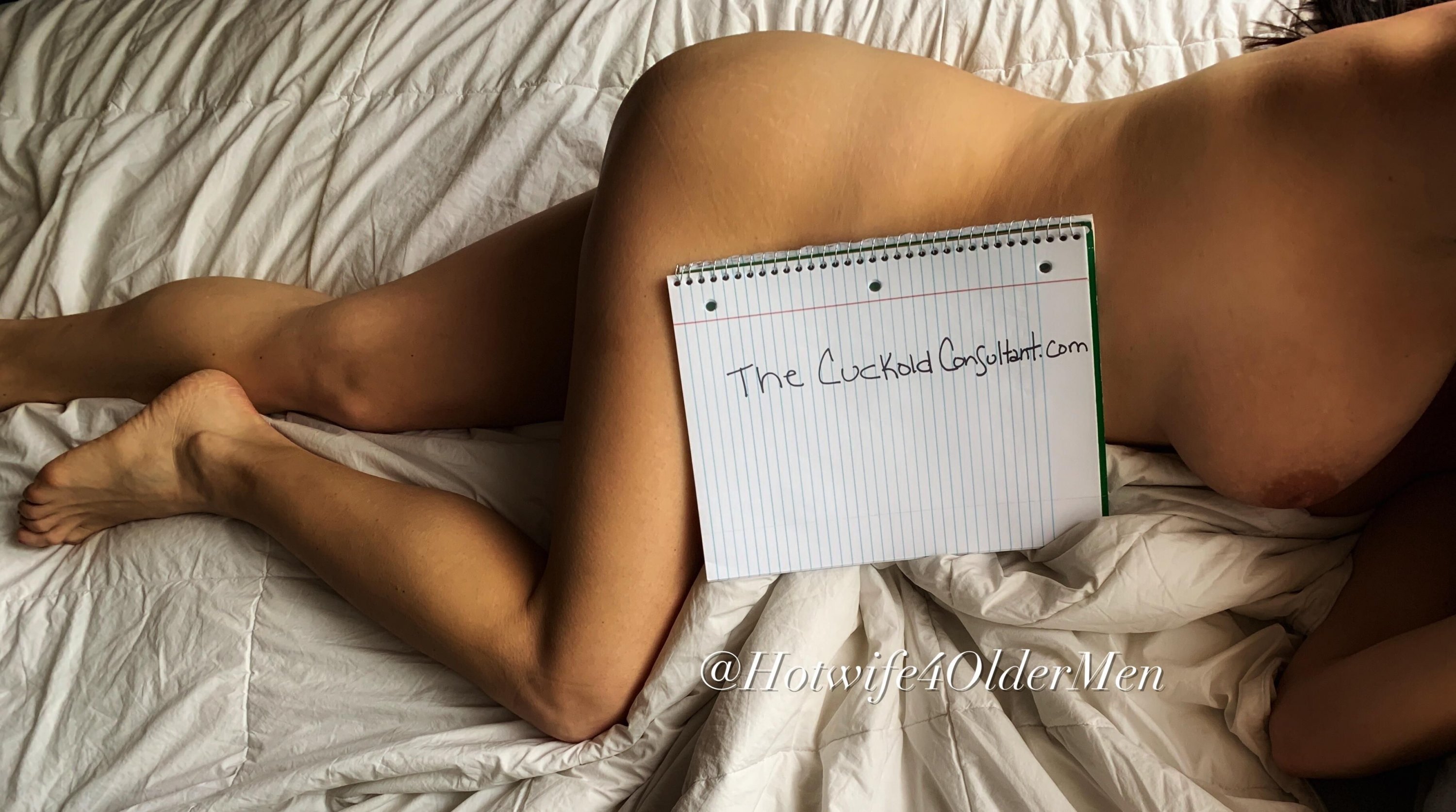