An Exclusive Interview - A Husband's Wife Pregnant With Her Lover

Q: How did the two of you get into the lifestyle? Whose idea was it, what was the other’s reaction, and how did it all progress to what it’s become today?

A: While I cant remember if it was something that I had fantasized about prior or if it was a spur of the moment decision, I do remember when I first brought it up. We were in the living room at our old house watching a movie and she mentioned that if she ever met that actor in person she “would so cheat on me”. The conversation flowed into other actors/ actresses we would sleep with if we had the chance.

From there I asked if there was anyone in her “real life” she would sleep with if she had the opportunity. There was a brief pause before she said no. I called her out on why she paused and she just kinda laughed. She asked if I meant now or if she was single? I responded by saying lets say you were single. She admitted that if she was single there was a guy at work named David she would have slept with already This didn’t surprise me as she had mentioned his name numerous times. It was then that I brought up that if she wanted to sleep with him then go for it. After months of encouragement they started seeing each other outside of work and eventually started sleeping together.

Q: So, how did the pregnancy come about? Was this a possibility that the two of you had discussed beforehand?

A: One of her fears about sleeping with him was what would happen if she got pregnant. I had assured her that nothing would change and that we would cross that bridge if it happened. I guess it was a surprise though, she was on birth control when it happened. But it wasn’t a shock either as they spent a great amount of time together so it was bound to happen at some point.

She was upset, confused and torn. She had taken precautions and thought it was fine. I was upset but wasn’t angry, we had discussed this as a possible consequence, so now it was more trying to calm her and assure her I wasn’t going to leave or do anything drastic. We had both agreed and accepted the fact that she was going to have the baby. I guess if anything the change was more towards “US” having the baby rather than just “HER”


Q: In the end, she wound up losing the baby. What was it like for each of you when this happened? A: She was heartbroken and upset when she lost it. I came home from work and she was on the couch bawling, I knew something was up and just did my best to console her. The loss of an unborn child is heartbreaking to any woman, regardless of how it was conceived or who fathered the baby. My wife was no different, that loss will never be fully understood by myself or anyone else who hasn’t been in that situation. I’m not sure that she ever wanted to have HIS baby as much as she was indifferent to it happening, while she claims she never tried to get pregnant by him, she has admitted it didn’t upset her that it happened. Looking back she has said that she isn’t “relieved” but thinks it may have been for the best, she thinks it would have been far too complicated had she had the baby. For me I didn’t feel anything either way, I just didn’t like seeing her as upset as she was and just tried to put the pieces back together as much as I could.


Q: Did the other guy know he had gotten your wife pregnant? A: She hadn’t told him at the time of her miscarriage. She was still going back and forth about whether she was going to tell him it was his or mine. After she lost the baby she did tell him that she was carrying his baby and what had happened. He was comforting to her, but admitted it was for the best. He was married as well and did not want the complications of fathering her child.


Q: Can you describe your emotional state throughout all of it? A: Like a lot of men who have shared there wives with other men I guess the fantasy of her getting pregnant was always there. She had been late before and it caused feelings of excitement and anxiety (and horniness!) until her period eventually came. This time was really no different until the home pregnancy test came back positive and was confirmed by her doctor. Once the reality set in that she was carrying another man’s child those feelings would would still be there but at times would be replaced by disappointment and at times anger.

At times I had to step back and seperate myself from the situation to appreciate the “miracle of life” that was developing inside her. I had to seperate the kink of her falling pregnant to him and accepting the fact that life that was forming was not mine. I never felt ashamed of what had happened but at time I did feel guilty because it was something that I had fantasized about and now she was in this situation that she had not envisioned before.

Overall, the initial shock and reality that she had been impregnated by another man and the devastation she went through when she lost it was the hardest part. I went through almost as many ups and downs as she did.

There were highs from realizing a common fantasy in the lifestyle, to lows of realizing she was actually going to give birth to another mans child and then her losing the baby. I am also thinking of the physical and mental arousal I received, the wonder of seeing my wife’s body start to transform in front of my eyes, the taboo of watching her grow another man’s child inside her and making love to the expectant mother of another man’s baby.

The lows would be the anger and regret that I felt towards her and the situation she was in. The stress she felt from struggling with the decision to tell him or not, the tragedy and sadness she felt from the unexpected loss of the child and not having many people to fully confide in to help mitigate the loss she felt. I guess the one constant was that she was prepared to have the baby so we worked together to nurture the pregnancy.

A: I think most guys in this lifestyle have this fantasy of another man knocking up their wife. I was no different. Even though she was on birth control I used to fantasize about her getting knocked up and watching her belly grow with his child. The reality of it is something different. You second guess everything but know there’s nothing you can do to change it. You feel kind of helpless. I did however get to realize my fantasy of fucking a woman that was pregnant by someone other than me!

She continued to sleep with me throughout her relationship with. Although as things developed emotionally between them our sex was mostly limited to reclamation sex afterwards than a primary outlet of sexual gratification. I would have to admit that for her the sex was more out of duty and as a reward for “allowing” her to sleep with him than out of desire for me. Physically for me I’m not sure that I have ever had sex that was as gratifying for me as entering her after she had been with him. Fucking her “creampie” is so clichè, but the way it felt to be inside her after he had emptied himself shortly before is an indescribable feeling, one that I will remember and have haunt me in a good way for a long long time, if not forever. While she never compared us physically she has described to me ways and reasons why the sex she had with him was so good.


Q: Where do you draw the line between what you will and will not explore now that all this happened?

Before I let you go, we have one more thing to share. The following are from two recent text message conversations this person had with his wife: 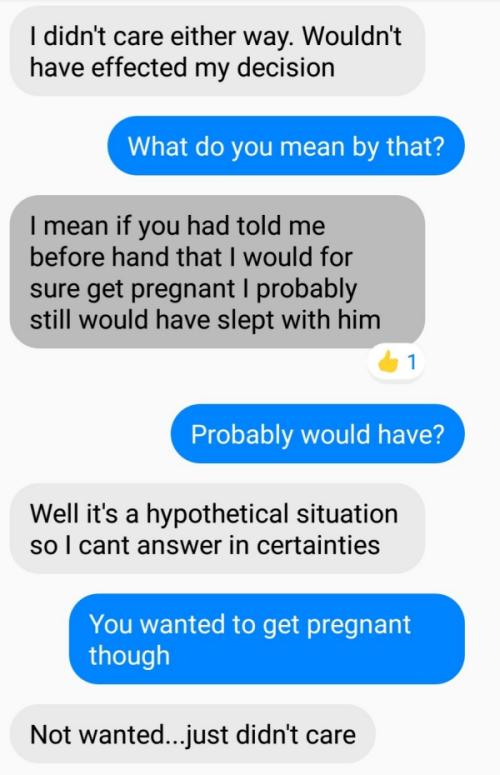 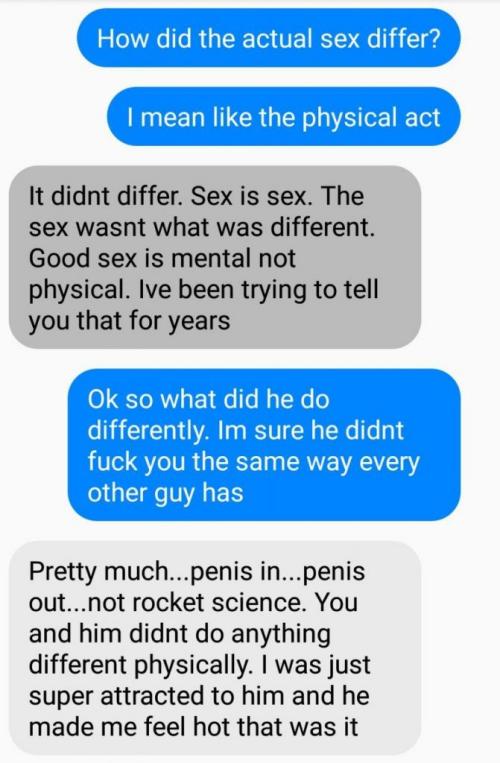