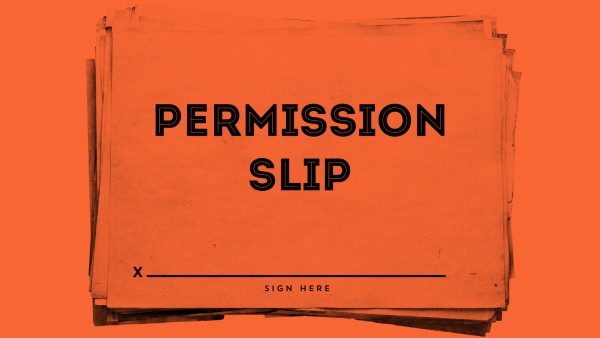 It’s not uncommon for many wannabe cuckolds and stags to believe that it’s necessary (or perhaps would be beneficial) to give their women “permission” to do what she wants with other guys.

Some guys do this by encouraging their women to flirt with guys they might encounter on a “girl’s night out”.

Others surreptitiously pack sexy lingerie or condoms with a little permission slip in their wife’s suitcase when she goes on a business trip.

Others yet try to tell their women how they would understand if she desires to try “other cocks” or felt curious about “other cocks”–especially if she hasn’t slept with anyone else (either ever, or in a very long time).

I’m here to tell you that for the large majority of you reading this, going any route which involves giving your wife “permission” to sleep with others is useless at best, and a mistake at worst. Here’s why.


Usless At Best, A Mistake At Worst

For starters, on the most basic level, no woman ever needs her significant other’s permission to do anything with another guy. The truth is that if a woman wants to engage in sexual activity with someone besides her primary partner, she will do so with or without his permission. If you don’t believe me, check out this article for a good in-depth read on the statistics of cheating: https://hackspirit.com/infidelity-statistics/ .

Next, the vast majority of women (at least those with traditional value systems) are far more likely to associate possessiveness and jealousy with love than they are to associate an indiscriminate willingness to overlook any infidelity she could commit (aka her man giving her permission to stray). Telling most women they have permission to cheat will confuse them and they’ll think something is wrong with you, them, or your relationship since you’re telling them something which flies in the face of how love & relationships are “supposed to” be.

To make matters worse, the way which most men go about trying to explain how/why they are giving permission usually doesn’t work and thus they wind up digging themselves deeper in the hole they inadvertently started digging to begin with.

Aside from the permission route being foundationally unsound, it’s also logistically ineffective when it comes to the situations where most men want to give their permission. For example, if your wife is going out with her friends on a girl’s night out, and her friends aren’t some wild group of non-traditional whores, your wife will probably value making sure she doesn’t do anything that any of her friends could construe as whorish. This means the very last thing she’ll probably want to do–if she values her friends’ image of her–is tarnish that image by acting like someone who doesn’t value her husband enough not to cross boundaries and flirt with some random guy.

We could just as easily pick apart the notion that putting condoms in your wife’s suitcase while she goes on a business trip is a good idea, but I’ll spare us that digression.

For now, it’s more useful to ask how/why does anyone ever get the idea that giving permission will actually yield good results?


When Dicks & Desires Take Over

The answer is simple: we let our dicks (desires) dick-tate the narrative we tell ourselves about how events will unfold or not unfold.

What I mean by that is what our desires and what-we-want-to-see-happen (aka our goals) take over our thought processes and convince us that what we want to happen actually can and will. Note: this isn’t bad in and of itself; that’s part of what gives desire it’s power over us. It hijacks our brains. It becomes bad though when we let it influence what we actually do and don’t do; in this case, when we feel compelled to act by giving our wives permission thinking it will have any positive effect in bringing about the ends we desire.

Here’s the stark truth: the stereotypical scenarios of a wife getting the number of someone she meets on a girl’s night out, or of a wife sleeping with some stranger she meets in front of her coworkers on a business trip, or of a sexually inexperienced wife being overcome by her desire for other cocks, etc…those are things that are done by couples who are already in the lifestyle. They’re not things that couples do to get into the lifestyle. There is an important difference there.

Scenarios where giving your wife permission actually result in her deciding to be naughty are almost always just fantasies, and that’s all they’ll probably ever be–until or unless you’re actually on the part of the hotwifing/cuckolding path where you and your significant other both acknowledge, share, and enjoy your mutual desires regarding the idea of her sleeping with someone else besides you. And in that case, you no longer need to even give permission anyway :-)

If you want to know more about what works and what doesn’t in a general sense, keep reading the articles in this section of the site. Or, if you’re actually serious about making your fantasy happen and not just into jerkin’ it to the idea, check out my professional consulting services: https://www.thecuckoldconsultant.com/cuckold-consulting-plans/ .