Addicted To Showing Off Your Wife? 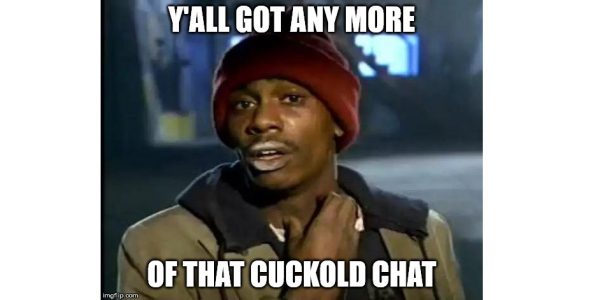 Have you ever had the thought that you should stop sharing photos of your wife? Have you ever tried to stop but were unsuccessful? Would you like to know how trying to quit/stop can actually make you more likely to not only continue but go even deeper down the rabbit hole?

In order to help you get a better understanding of your own desires and why trying to repress them can make things worse for you, I’m going to briefly discuss some of the key findings in a groundbreaking meta-analysis research article entitled After-effects of self-control: The reward responsivity hypothesis from the journal _Cognitive, Affective, & Behavioral Neuroscience (_otherwise known as CABN*)

Nota Bene: the abovementioned article is absolutely jam packed with a lot more than what I’m going to talk about here. It goes into much more detail, including providing functional neuroimaging evidence and electrophysiological evidence. If you’re a science guy, I highly recommend you read the entire article. (It’s behind a pay-wall but is accessible for free via sci-hub if you know what that is).

*CABN, a publication of the Psychonomic Society, is the leading vehicle for strongly psychologically motivated studies of brain–behavior relationships, through the presentation of papers that integrate psychological theory and the conduct and interpretation of the neuroscientific data.

What You Need To Know

We start with a simple fact: a person’s efforts at self-control—regardless of whether or not they succeed or fail—can be “phenomenologically aversive”. That’s another way of saying that exercising self-control can be unpleasant.

So, it follows that since no one likes feeling those types of aversive/unpleasant feelings, it makes sense that we attempt, consciously or subconsciously, to balance out or countermand those unpleasant feelings with experiences/rewards that would yield positive ones. The irony is that we seek rewards in the easiest or best way we know how which usually means indulging in the very activity we were trying to exert self-control over. How and why does this paradox happen?

There are several theories; here are the major ones discussed in the article:


Opponent-process theories assume that organisms have a fundamental motivation to maintain homeostasis, and shifts in affective states over time are thought to be a consequence of this motivation to maintain balance. Prolonged strong emotional states (state A) can have strong opposing emotional after-effects (state B). Self-control exertion is aversive, so prolonged exertion may eventually trigger an internal threshold that temporarily shifts attention toward sources of reward or good feelings until homeostasis is attained."

In layman’s terms: when we feel bad, we are motivated to do things to feel good. So because self-control attempts are aversive, we seek to balance them out and thus become more likely to seek out an experience that gives us a reward.

In layman’s terms: think of your self-control, for which you exhibit in all areas, as coming from one finite/limited tank. You only have so much, and the more you use (the more self-control you exert), the less you have available to use. You can only use (exert) so much before you don’t have enough to continue to exert self-control successfully.


“The process model explicitly suggests that shifts in attention and motivation tune individuals toward rewards and gratification; it proposes that individuals may feel as though they deserve a reward for their prior exertions, so they seek more rewarding or relaxing events to help reduce the negative affect accompanying the exertion of control. These shifts in motivation and attention seem to bias individuals away from further engagement of control and toward reward.”

In layman’s terms: successfully exerting self-control results isn’t a pleasant experience. Because we are wired to seek out good experiences in an attempt to balance out unpleasant experiences, your brain biases you to feel as though you deserve a reward.


“The self-control as value-based choice model proposes that exercising control shifts valued-based calculations in favor of more immediate, hedonic options over (more effortful) options in line with one’s long-term goals. Consider an individual who has just completed a cognitively demanding task (e.g., tax preparation) prior to going out to dinner. At dinner, the cognitively taxed tax-preparer has a choice between two entrees: the healthy option (e.g., a salad) and an unhealthy option (e.g., a cheeseburger and fries). In summary, the value-based choice model provides a potential neurocognitive framework for thinking about how exerting self-control may increase reward responsivity – by shifting the weights attributed to the subjective value of seductive immediate rewards versus more logical long-term goal pursuits.”

In layman’s terms: after exerting self-control, you start to weigh indulging in a reward as more appealing than continuing to exert self-control.


Making Sense Of It All

The article summarizes as follows: “Multiple theoretical perspectives are thus congruent with the possibility that the extended engagement of control systems may lead to stronger desires and reward-seeking behavior. The collective wisdom of these theories suggests a reward responsivity hypothesis of the after-effects of self-control, whereby in an effort to return to a homeostatic baseline after initial bouts of self-control, attentional and motivational processes work in concert to constrain how choice alternatives are weighed during subsequent tasks. The consequence is a shift in the value of the choice alternatives and decision thresholds in favor of action toward immediate rewards.”

In layman’s terms, in case it’s all not clear yet, what this means is that attempts at self-control are aversive/unpleasant/exhausting. We seek to balance those bad feelings out by becoming more likely to engage in experiences which will return us to a better/more positive/pleasant emotional state. The way in which we’re most likely to do that is to seek out the very reward we are trying to exert self-control over.

Here is the chart which depicts this:

So if you’ve considered or are considering trying to quit something that has both psychological and biological roots within you, I urge you to take a deep breath, relax, and read on—because there’s more.

The Destructive Role Of Guilt

What would you think if I told you that there’s evidence which suggests that feeling crap about ourselves actually makes us feel good (in the short term)? Well, according to neuroscientist Alex Korb, “Pride, shame and guilt all activate similar neural circuits … interestingly, pride is the most powerful of these emotions, except in the nucleus accumbens, where guilt and shame win out. This explains why it can be so appealing to heap guilt and shame on ourselves – they’re activating the brain’s reward centres.”

When you do something that seems stressful or dangerous or engage in an activity that part of you has misgivings about, your brain wants you to “do something” to take care of the problem/dissonance you experience. When you take action to get rid of the stress or danger or dissonance, the reward center of your brain kicks in and gives you a little hit of short-term relief. The problem is, your brain can perceive guilt or shame as “doing something.” So when you worry, ruminate, or blame yourself for something you think you did wrong, your brain perceives that as taking action, and you get a hit of short-term relief (the reward circuits in your brain light up).

It doesn’t stop there though. Notice the twice-used qualifier “short term” in the above paragraphs. That short-term qualifier is used because the effects that feeling guilt and shame can have in the long term are ones which can lead to depression, a state associated with a lower than normal ability to exert self-control. So in the long term, you become even less capable of controlling the behavior which you feel guilty for not controlling in the first place.

In summation: the more you allow yourself to feel guilty for what you do, the less able you will be in the future to control it.

The first thing you want to do is stop playing the guilt game after you indulge your desires. Your desires are normal and natural. Feeling guilty over something that is normal and natural is not only absurd, but unequivocally harmful—so hear me clearly: no matter how much guilt you feel, you should understand that it’s only going to entrench you deeper into what you feel you can’t get out of.

What you resist persists so stop beating yourself up for what you do. For more information on understanding how your desires are natural and normal, check out the following two posts:

Do You Want To Expose Your Wife?

Next, have you ever heard of the Goldilock’s principle? It’s named after the children’s story The Three Bears and imparts the importance of the concept of “just the right amount”. It’s beyond the scope of this particular article to go into what you should do in order to healthily integrate and explore your desires, but you should absolutely know that telling yourself you’re going to quit is only going to make things worse.

Start thinking about some things you can do to exercise some balance, and stay tuned for more!